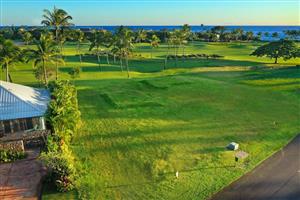 It’s only fitting that the voice of Mr. Incredible has a vacation home that’s – well, you know.

The actor is Craig T. Nelson, an avid golfer and star of an array of TV shows and movies, including Disney’s hit “Incredibles” franchise. The home is a two-bedroom, two-bathroom, 2,738-sq. ft. Hawaiian-style abode tucked into the trees just off the beach on Kauai’s Na Pali coast. (More details here.) Its backyard features a chipping green that was designed more than two decades ago by one of golf’s acclaimed architects. And now the home is on the market, so get your checkbook ready. The price: $14 million.

Nelson, 75, grew up playing the game and remains a ravenous golfer – he carries a 6 handicap – but said in a phone call Tuesday that he’s ready to move on from his tropical digs.

“At this time of life, we’ve really enjoyed it and it’s time to downsize,” Nelson said. “It’s sort of like how you come to grips with losing distance in golf and you have to work around it. It’s the same thing in life.”

The land was previously owned by the Beach Boys’ Brian Wilson, and Nelson built his home there from scratch. Shortly after moving in, Nelson befriended Robert Trent Jones Jr., who also has a home on the island, and RTJ designed Nelson’s green – in his own unique way.